Molecular Basis of the Transition to Addiction -

Our project aims to identify the biological basis of the "addiction prone" phenotype that in some drug users triggers the transition to true addiction characterized by a loss of control of drug intake. The attractiveness of this project, compared to the international competition is two-fold. First the availability in Bordeaux, both in the rat and mice, of what is unanimously considered the best model of addiction. This model, because of the workload and technical complexity involved, is still not in full use in other laboratories. Second, the coordinated efforts of scientists at the forefront of several domains of neurobiology, which will enable an unparalleled analysis of the biological determinants of the transition to addiction

The initial transition from sporadic drug intake to sustained/excessive drug use seems to be dependent on a quantitative change in the activity of the reward system and likely via an increase in the activity of mesolimbic dopaminergic projections. In contrast the transition to addiction seems to be associated with a persistent loss of synaptic plasticity and LTD in particular. This modification suggests that from a quantitative impairment mediating excessive drug intake, the brain shifts to a qualitative impairement that mediates addiction, in which the ability to encode new information and maintain behavioral plasticity is lost.

Resistance to addiction is due to an active neurobiological resilience

During the sustained/excessive drug use period, but before addiction appears, LTD is lost in all individuals. Strikingly, a non-addict in which controlled drug intake is maintained, progressively recovers normal synaptic plasticity, whilst this function is permanently lost in the addict. Thus, the transition to addiction seems not to be simply due to specific modifications occurring in the addicted brain but rather, to the incapacity of the addict to adapt and recover from drug-induced impairments, something that the non-addict is able to do. Consequently, in order to develop new therapies of addiction, studying adaptive processes occurring in the non-addict could be at least as important as studying those occurring in the addict.

In order to test if the transition to addiction is due to qualitative or quantitative impairment, using our addiction model, we will analyze modifications that could mediate one or other pathophysiological process. In parallel, we will also analyze the impairments occurring in addicts and the compensations occurring in non-addicts. Finally we will progressively go from correlation to causality using a multidisciplinary approach. Neurobiological changes will be primarily studied in the network of structures implicated in the control of motivated behavior, i.e. the VTA, the nucleus accumbens, the bed nuclei of the stria terminalis, the prefrontal cortex and the amygdala. Modifications in these brain structures will be studied, before and after the occurrence of addiction. We will initially study addiction to cocaine, the drug with which Bordeaux has the strongest experience, before extending our studies to nicotine and heroine. 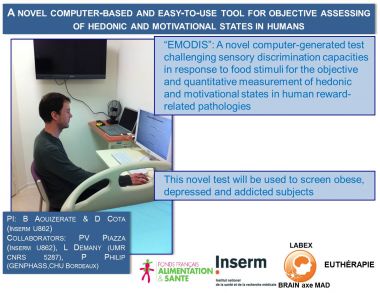 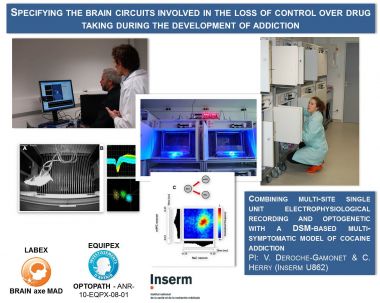